ABKCO is kicking off a year-long celebration of the upcoming 90th anniversary of Sam Cooke’s birth starting this January 24 with the release The Complete Keen Years (1957 – 1960), a remastered and extensive 5-disc set.

The Complete Keen Years (1957 – 1960) collects Sam Cooke’s body of work as he began releasing secular albums, stepping away from the Soul Stirrers where he found great success as a gospel singer. Cooke had been releasing and dominating the gospel sales market over the six years previous to “You Send Me” and “Summertime” being released. Within this newly remastered collection are his unique versions of standards alongside performances that showcase his songwriting skills. Sam Cooke defined himself as a voice ahead of his time elevating the sound of soul at the turn of the decade.

The now timeless “You Send Me,” Sam Cooke’s 1957 Keen Records debut, was a landmark recording on multiple levels. Composed by the artist, it was his very first #1 record and groundbreaking in no uncertain terms: a pop record by a gospel great that created the template for what would come to be known as “soul.” Cooke’s easy manner, bell-clear intonation and truly spectacular vocal ability set him apart from all others in both pop and R&B. This holds true today, on the eve of his 90th birthday, just as it did at the dawn of his secular career.

Sam Cooke was very much at home in the recording studio and the many tracks he cut over the course of nearly three years for John and Alex Siamas’s Keen label reflect his massive talent at a turning point. The Complete Keen Years, sourced directly from recently recovered original master tape reels, offers an unparalleled listening experience thanks to years of painstaking research that has yielded tracks from the original tape reels from which Cooke’s Keen albums and singles were mastered in the late 1950s and early 1960s. For The Siamas brothers, the record label was second to their primary business providing aircraft parts to the aerospace industry. Sometime after the label shuttered, the original masters went missing. It was fortuitous that a search of an airplane hangar yielded the tapes and now, for the first time in more than five decades, they are again the source for this precious Sam Cooke material.

The Complete Keen Years (1957 – 1960) offers the Sam Cooke aficionado an opportunity to experience all of Cooke’s Keen album and single tracks for a comprehensive overview of his time at the label. The 5-CD set includes the content of his five originally released Keen LPs plus multiple bonus tracks, a total of 65 tracks in all. Also included in this box are rare photographs and ephemera from the Keen archives, expanded extensive session information alongside voluminous, insightful liner notes by writer Michael Corcoran. 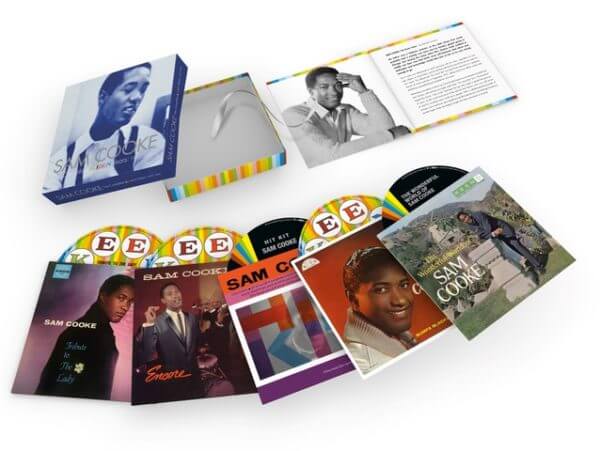 The first volume of the set offers the thirteen tracks that comprise Cooke’s 1958 LP debut for Keen, simply titled Sam Cooke also known as Songs By Sam Cooke, presented in mono, as originally recorded and released. Beyond the glorious “You Send Me,” the album includes “Summertime (Part 2),” “Ain’t Misbehavin’,” “That Lucky Old Sun” and “Danny Boy.”

The second album in the set includes the entirely of the 1958 release Encore that includes such Cooke-interpreted standards as “Ac-Cent-Tchu-Ate the Positive,” “When I Fall In Love,” “I Cover the Waterfront, ”and “The Gypsy.” As with Sam Cooke, orchestral backing is by Bumps Blackwell. The cover depicts the singer swinging with jazz musicians behind him, which is the perfect illustration of the sound of the album.

Sam Cooke’s 1959 salute to Billie Holiday, Tribute to The Lady, is the Complete Keen Years third disc, also offered in mono as originally recorded and released. This session covers a select group of songs from Billie Holiday’s catalog including “God Bless The Child,” “I’ve Gotta Right To Sing The Blues, “Good Morning, Heartache” and “Crazy She Calls Me.” Sam Cooke found his voice not by imitating popular singers but weaving his own interpretation of songs made notable by others. In the essay by Michael Corcoran, he refers toTribute to The Lady as an essential look at how Sam Cooke found his voice:

“Like Lady Day, Sam had a pretty voice too honest to be cute, sending the words on paper through a spiritual journey before coming out of a mouth fluent in both sorrow and triumph. But he didn’t sing songs her way.”

As with every recording, Sam Cooke put every note in a place all his own.

The aptly named Hit Kit, when originally released by Keen in 1959 was a compilation of the singer’s most popular songs and they comprise the first 12 tracks on the Complete Keen Years fourth disc including the original mono versions of “Only Sixteen,” “Everybody Loves to Cha Cha Cha,” “Win Your Love For Me” and “You Were Made For Me.” Those are augmented here by 9 bonus tracks including six rare stereo Keen singles.

The Wonderful World of Sam Cooke is the box set’s fifth disc. It was Cooke’s last album release for Keen and takes its title from “(What A) Wonderful World,” written by Cooke with Lou Adler and Herb Alpert; the latter music industry legends were on staff at Keen at that time. Highlights include “That’s Heaven To Me,” “You Were Made For Me” and “Almost In Your Arms (Love Song From “Houseboat”).”The six bonus tracks include both a “gospelized” and the originally released versions of “Steal Away” and “Deep River” plus non-LP tracks “One Hour Ahead of the Posse” and “So Glamorous.”

3) Along the Navajo Trail

8) I Cover the Waterfront

8) Let’s Call the Whole Thing Off

9) Lover Come Back to Me

11) They Can’t Take That Away from Me

3) Everybody Loves to Cha Cha Cha

9) (I Love You) For Sentimental Reasons

10) Little Things You Do

15) Almost In Your Arms (Theme from Houseboat) (Stereo) [Bonus Track]

1) (What A) Wonderful World

4) Almost in Your Arms (from “Houseboat”)

15) One Hour Ahead of the Posse [Bonus Track]

You may have missed